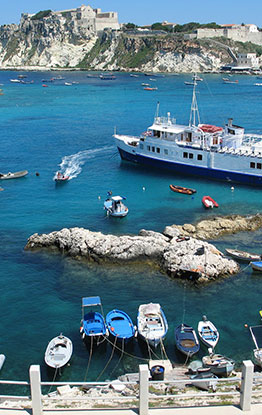 The holidays in Gargano are a valuable opportunity to visit Tremiti Islands, jewels of Italy, a natural paradise among the most fascinating thanks to its depths, currently protected marine areas.

The Tremiti Archipelago consists of six Islands, nate legend since inception in water of some boulders by the hero Diomedes, among which two are inhabited, while the others are simply reserves.

San Domino and St. Nicholas housing listings and bathing facilities and are ideal for enjoying the sea and Sun, surrounded by fresh pine forests, which cover the territory. Are the only two inhabited islands.

Capraia and Cretaccio represent, instead, the habitat for several animal species, such as le Diomedee, become birds symbolic of quakes. Pianosa is a nature reserve surrounded by beautiful backdrops, rich in fish species and marine flora, teatro ideal for who loves to dive or snorkel.

Finally the Scoglio della Vecchia is a rock, according to the legend, inhabited by a witch intent on spin, which you can see only on stormy nights.

The Tremiti Islands are a true natural paradise, to visit at least once in their lives, to find out what nature can create wonders.